But first the questions of the day:

Q: What did you find most inspiring today?

A: Looking at the statistics for the recent drug wars….

Q: What five things from today will you want to do more of?

Intention: do the 7 minute work out for the first time in a while.

Reflection: I did it and it was a lot easier and less painful than I remember.

Intention: play another lightning round of GeoGuessr.

Reflection: we didn’t get that good of a score even though we got perfect on one of the spots. We did figure out that a lot of country’s  don’t have street view also not all of a country has street view, so that will narrow down our guess by a lot.

Reflection: it was really enlightening, I wasn’t too aware before of all of the suffering indigenous people have had to go through in the past and are still some what going through. After that we broke up in to groups and searched something that takes away somebody’s freedom. I looked up the recent drug wars and the statistics were staggering and honestly a bit racist. 80% of people put in jail for drugs were either Hispanic or Black.

Intention: watch the movie about the current school system.

Reflection: I didn’t watch much of it but from what I did watch I thought it was pretty interesting. Those boarding schools seemed like prisons to me, I mean they were preparing the kids to be soldiers and forcing them to speak English.

Reflection: I got a lot more people to join today! We played two games: Freeze and Party Quirks. In freeze 2 people do a random Improv scene and when one of the audience say FREEZE! they have to freeze and the person who said freeze comes up on stage and replaces one of them and starts a new scene based off of what the people looked like when they were frozen. They liked playing Freeze a lot. In Party Quirks the host of the party has to guess what his party guest’s quirks  are. Quirks are anything from a turtle wizard to a pizza delivery guy.

Reflection: that’s done now and Drew and Abe are going over to Tim’s house tonight for dinner, so they’re going to give him the gardening proposal then. 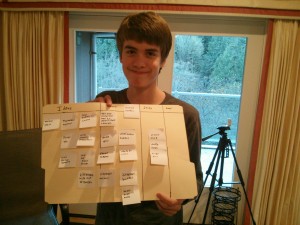